Engine Cooling System in Automobiles & How it Work 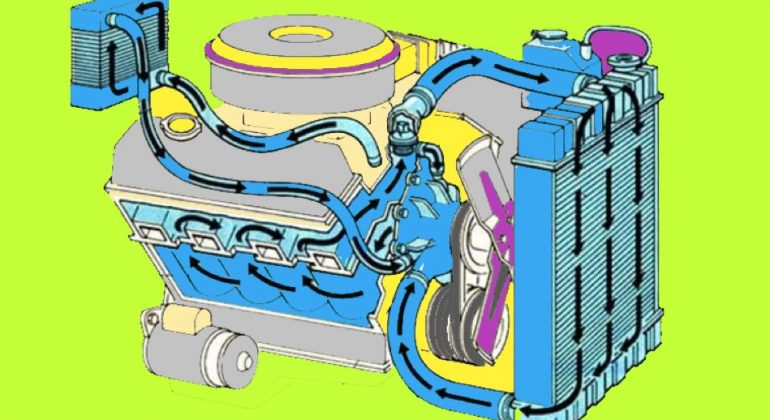 Buying a new engine is costly. But if your car’s engine doesn’t have a cooling system. It can heat up the car. and may deteriorate the car.

Continuously running a car or an automobile can heat up the engine, and reach up to its extreme position beyond your thinking. According to the study, in engine cylinders, the temperature of the burning gases can reach up to 1773.15K – 2273.15K (1500°C – 2000°C). It is more than the temperature and Melting Point of Platinum (1768°C) and Titanium (1668°C), which can oxidize the lubrication oil inside the engine and deposit carbon on the surface.

The amount of heat delivered to the cylinder walls is too high. If the heat is not released from the cylinder. however, it will be the piston, high fuel consumption, pre-ignition, and burning of lubricants, etc.

Types of cooling systems in Cars

The Two types of cooling systems are used in the engine.

Air cooling systems (up to 15–20 kW) are used in small engines up to 15–20 kW. In these types of systems, the heat conducted by the outermost parts of the engine is radiated and the air is driven away from the stream. An air-cooled engine is simpler to create than a water-cooled engine because heat is transferred directly from the cylinder and head to the air.

When the automobile is normally driven at sufficient speed to provide sufficient wind speed to transfer heat. The whole cooling system is only the fins on the air-cooled engine. The air-cooled engine has a fan or blower, to improve the airflow in the rear of the wings adequately, with the small or slow movement of air.

As you know the air cooling system is usually used in small automobiles such as scooters, motorcycles, and small cars. It is also provided in some small industrial engines, where the forward speed of the machine gives good velocity to cool the engine.

In the water cooling system, water is circulated via the water jacket around each valve seat, valve stems, and combustion chamber. The water-cooled engine block and cylinder head have reciprocating cooling channels. All channels at the top of the cylinder head are converted to a single outlet.

This removes excessive heat generated in the engine and protects it from overheating and keeps the engine at working temperature for efficient and economical work.

The water continuously moves by a centrifugal water pump which is operated by V-belt from the pulley on the engine crankshaft. It drives hot coolant from the engine to the radiator, a form of the heat exchanger. After passing from the radiator, water is poured into the drain and the water is pumped through the cylinder inlet route.

This is a centrifugal type pump. It is located at the front of the cylinder block and is usually driven by means of a belt. This type of pump consists of the following parts:

The bottom of the radiator is connected to the suction side of the pump. The power is transmitted to the pump spindle from a pulley at the end of the crankshaft. Seals of various designs are incorporated in the pump to prevent loss of coolant from the system.

The main purpose of the radiator is to cool down the water received from the engine. The radiator consist of three parts:

Hot water from the upper tank, which comes from the engine, flows in the downward direction through the tubes. The heat contained in the hot water is conducted to the copper fins present around the tubes. An overflow pipe, connected to the upper tank, permits excess water or steam to escape. There are three types of radiators:

The fan is generally placed on the water pump pulley, although in some engines it is attached directly to the crankshaft. A fan helps to solve two purposes in the cooling system of an engine.

In order to prevent the water in the cooling system from freezing, some chemical solutions which are known as anti-freeze solutions are mixed with water. In cold areas, if the engine is kept without this solution for some time, the water may freeze and expand leading to damage in the cylinder block, cylinder head, pipes, and/or radiators. The boiling point of the anti-freeze solution should be as high as that of water. An ideal mixture should easily dissolve in water, be reasonably cheap and should not deposit any foreign matter in the jacket pipes and radiator.

It is a kind of check valve which opens and closes with the effect of temperature. It is fitted in the water outlet of the engine. During the warm-up period, the thermostat is closed and the water pump circulates the water throughout the cylinder block and cylinder head. When the normal operating temperature is reached, the thermostat valve opens and allows hot water to flow toward the radiator. Standard thermostats are designed to start opening at 70 to 75°C and they fully open at 82°C. High-temperature thermostats, with permanent anti-freeze solutions. start opening at 80 to 90°C and fully open at 92°C. There are three types of thermostats: (a) bellow type, (b) bimetallic type, and (c) pellet type.

This system works on the principle that the hot water has a lower density and rises up, and cold water is being heavier than goes down.

The radiator is kept upper the engine, for the easy flow of water. This is how hot water in the water jacket rises and goes over the radiator. Where it passes, cools, and is collected in the bottom tank. In these systems, the rate of supply is too low.

This is an updated version of the thermosyphon cooling system. The main motive of the impeller cooling system is to provide the right regulation, capable of the maximum engine cooling pump efficiency. And it is all the same except that it has a small impeller unit powered by the engine to increase the circulation rate of water.

This system has the same construction as the thermosyphon cooling system except that it uses a centrifugal pump for circulating water in a water jacket and radiator.

It is a modern system of water cooling in which water is circulated effectively by a cylinder block to the radiator. And come back via a centrifugal pump driven by the engine V-belt.

This is an updated version of the pump circulation cooling system. In this, you will get the special radiator cap with a spring-loaded pressure valve and a vacuum valve. When the engine gets heat the cap becomes gas-tight, and water vapor is formed on the cap.

Therefore a raised water boiling point is the system. So that the working temperature of the engine also increases, a higher temperature gives better thermal efficiency.

In conclusion, the cooling system of the car prevents the engine from overheating, It also increases the thermal efficiency of the engine. The engine cooling system controls the temperature so that we can easily travel for long hours. Out of the total heat in the engine, 30 to 40% of heat is converted into useful mechanical work. The remaining heat is expelled into the environment through exhausted gas.