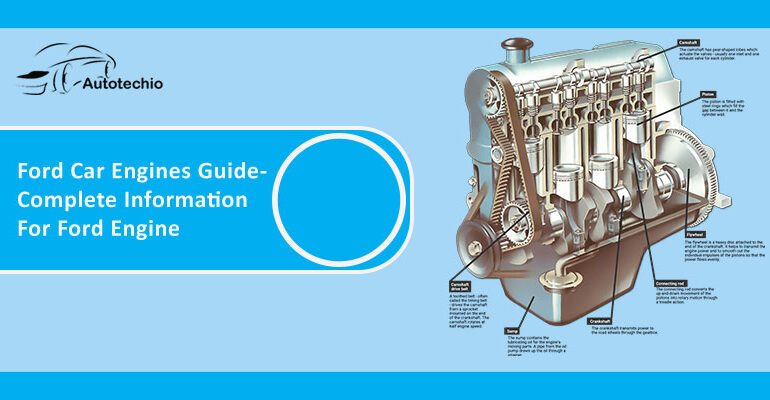 Similarly, like a human body, a car engine needs the energy to move from point A to point B. Also, in the modern age of car engines, there is no big change in its core parts & components. Whenever you buy a remanufactured engine or a used engine at a low price. The design, parts & components of the engine remain the same. Ford has an active history in setting benchmarks for classy cars and extremely powerful and state-of-the-art engines. Ford engines are premium quality engines made by the company itself and are mainly used in Ford cars and also in the aftermarket. Here in this blog, we have shared basic & important information related to the For car engine. This Ford car engine guide will help you a lot to understand the structure & layout of your four-wheeler engines.

As we know, the car engine is mainly responsible for the transformation of energy from fuel to spark to create the power for moving your car. In this modern era, car engines designed with mainly two technology, mechanical or electrical. So if you want to buy a Ford car or want to understand the structure & components. The Ford car engine guide will provide you a better opportunity. But before jumping on our topic, we have discussed the history of Ford.

Henry Ford as we know built his first ford car in Detroit in 1896 followed by making the first assembly model in 1903 named Model A. With the help of his 11 associate members, he founded the Ford Company in 1903. Just 5 years later in 1908, Ford introduced its first commercially successful Model T in the market.

But did Ford stop there? NO! From the early 1950s to the late 1970s, Ford continued focusing on manufacturing its engines like Flathead I6, Flathead v8, Lincoln Y-block, Mileage Maker I6, Ford Y-block, MEL V8, Ford FE engine, Ford Kent engine, Super Duty V8, Thriftpower I6, Windsor V8, Truck I6, Ford 385 engine, Cleveland V8, Ford pinto Engine, Cologne V6 and a few more. All these engines were broadly categorized under 4-cylinder engines, I6 engines, V6 engines, Small Block V8, Medium block V8, and Big block V8. All these best diesel engines for cars were of the premium and best quality back then.

A plethora of variants under the small block V8, medium block V8, and big-block V8 engine types were also made available such as Windsor V8, SHO V8, Cleveland V8, Super Duty V8. In this type, only Modular V8, Boss V8, and Godzilla V8 are still available.

Under the V10 engine type, we had variants like Modular V10 which after a long run since the late 1990s was discontinued just recently. The oldest diesel engines that Ford made were the V8 International harvester IDI, V8 Navistar T444E, and V8 Navistar VT365.

We assume you must be wondering about what engines Ford is currently making or “Does Ford have good engines currently?”. We have a long list and discussion pending on this matter.

Yes, Ford is currently making a number of good quality and premium performance engines as we have discussed above. A few of the current Ford petrol engines that are being manufactured include EcoBoost I3, Duratec I4, EcoBoost 2.0L I4 (twin-scroll), EcoBoost V6, Cyclone V6. They are more popular with Ford Mustang V6, and also the ford V8 engines like Modular V8, Boss V8, and Godzilla V8.

Ford design & manufacture various categories of four-wheeler engines for sale. All car engines designed with the latest technology & quality parts. Also, the ford online configurator works with a clear, flexible & navigate the process. When you are select the preferred model of Ford such as Edge, Focus, Fiesta, Galaxy, or any other, you get the selection opportunity from 7 various categories including a few more extra options. The choice completely depends on the buyer’s needs. Here get the detailed information with the help of the Ford car engine guide, the available makes & models of this reputed brand’s car engines.

The Flathead V8 engine for Ford is one of the oldest models of this organization. This car engine launched in the year 1932 & get more popularity due to its highly advanced & powerful performance. The engine comes with 8 cylinders & a 65 HP configuration which is astonishing at that time.

Introduced in 1963, it was lightweight, had smaller dimensions, and was primarily made for entry-level models. The engine provided decent performance and was provided with all car models Ford made. But it was best complemented with Ford Mustang. The quality performance & durability features of this engine make them more efficient during operation.

Cobra 428 Ford Jet engine introduced in the year of 1968. This car engine starting the era of the new muscle car engine which gave a competitive advantage to Ford compared to the competitors. It was robust, durable, and affordable. It provided a horsepower of 335 HP and even more. All this gave the engine the title of Stock car champion bringing in the era of muscle cars.

With the lots of changes in a previously launched car engine, Ford has introduced the latest & updated version of the Boss 429 car engine. Compared to other big-block engines it has a different geometry. To deliver better torque & power engine is design with a semi-Hemi combustion chamber. The power range is between 375 Hp to 500 Hp.

Low compression engines were the focus for car manufacturers after the muscle car era passed in the 1970s. HO 5.0 was another version of the V8 engines. V8 5.0 complemented with Mustang 170 HP output that provides them high efficiency & long duration continuous running hours.

The Ford Voodoo V8 engine is the most popular & highly demanding version of the car engine. This most powerful, efficient, and best engine for cars introduced in the year 2010 which also get titled the most popular engine of that era. The highly configured specifications like variable valve timing system, 32 valve head, etc. V8 Voodoo’s Horsepower was 526 HP.

Ford has been at the forefront of the industry since it emerged and its engine fascinates car lovers around the world. Ford has not ever stopped experimenting on their engine and car components and has been changing their style according to their competition, needs of their customers, and trends which makes their engines one of the most sought after. Whenever you buy a Ford remanufactured engine or Ford used engine at an affordable price. The quality, performance & efficiency of this engine is very high.