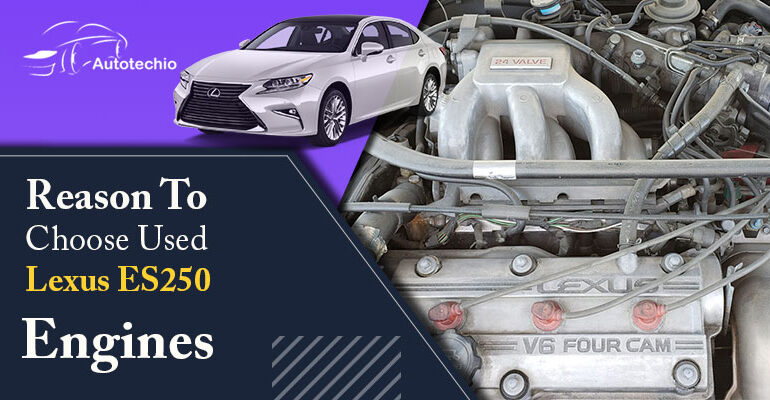 Getting the issue with your Lexus car engine & want to replace it? But are confused buying a remanufactured engine or a used engine which one is better for your Lexus Car? Here in this blog, we have shared the information for the reason to choose used Lexus ES250 engines. Also, compression is why choosing a Lexus used engine is better to go with remanufactured. So if your Lexus car engine is not responding properly due to engine failure then this is the right time for choosing a low-cost used engine for your car. But before discussing more information for & reason to choose used Lexus ES250 engine first we will discuss the history of Lexus.

Before we start about Lexus engines, let’s talk a bit about Lexus. Who owns this Lexus and the country of origin? Few of you might know that the Lexus brand owned by Toyota Motor Corporation. The headquarter of this organization is located in Nagoya, Japan. But, the luxury vehicle brand has taken care of all the operations from its own centers for design, engineering, and manufacturing since the early 2000s independently from the Toyota Motor Corporation.

The first car launched under the name of Lexus is LS 400 with a 4.0L V8 gasoline engine and rear-wheel drive. It made its debut at the North American International Auto Show in Detroit and it made its splash in the International market. Then it’s been over two decades since Lexus survived international markets with 10 million vehicles sold.

The Lexus vehicle range embraces ten lines and thirteen individual models. The most used engine in its models is the 1UZ-FE Engine, which is over square by design with a bore and stroke size of 87.5 mm x 82.5 mm (3.44 in x 3.25 in).
The most powerful engine of the Lexus is the LFA 1LR engine. It’s the top of the line for engines. The 1LR-GUE identified as the best engine of the preceding decade.

What makes the Lexus Engine different from others?

Being a luxury division of Toyota Motor Corporation, Lexus was made for better performance and better quality, which can make it the world’s best car brand. To fulfill the requirement, the first thing which sets it apart from others is its engines. The engines are constructed for speed and durability. Lexus has gasoline-powered engines, but they have also developed a hybrid power train combining electric motors with gas-powered engines.

Lexus’ LFA 1LR engine is the most powerful engine, and it’s a 4.8 liter naturally aspirated V10 sport edition to deliver high performance, quick acceleration, and blinding speeds when compared to others. The 1LR-GUE manufactured of aluminum, titanium, and magnesium to achieve ultra lightness in weight and the design accomplished low friction internals and low mass. The engine could produce 553 horsepower and it came up as the most impressive engine. With money, it still is better than its rival (Ferrari Enzo, priced almost doubled). Its performance, its design, and cost-effectiveness made it most iconic through the comparisons of all the other engines in existence.

Why choose a used Lexus Engines

For choosing an engine, You may go for a new one. But we always need economically viable means of transportation. And if a used one can be a better treat to your pocket, then why not go for it? Buying used Lexus ES250 engines is definitely worth it because of its luxury and brand and not to forget they are inexpensive. Also, a Lexus can stand the test of time as compared to other luxury brands. Being the world’s best engines Lexus engines (even used) are more suitable for long-term performance and problem-free driving. Lexis engines also determine the longevity of your vehicle between repairs while other brands’ engines failed to do that. Here some benefits listed,

What to keep in mind while choosing used Lexus ES250 Engines

We have talked enough about the Lexus engines, no doubt they are the best ones but still, you should keep in mind that there might not be much difference between an old and a new one but when you’re investing your money, you should always keep your ears and eyes open. When you’re buying a used engine, always go for an authentic vendor to avoid any discrepancies. The cost is always important and so is the warranty. Always check the model and the year of the manufacture and also whether they rebuilt or remanufactured. Buying something wrong or not suitable can affect the performance and longevity of your vehicle. With the right choices and the right selection, your vehicle can be as new again. Apart from the selection of used engines for Lexus, you can also buy a used transmission & remanufactured transmission at a low cost, if the old one is not responding properly.

There is a number of reasons that are responsible for the engine failure that fails your car engine operation. Also, due to this reason, your car got stuck & this is the worst experience for any driver. Here the same thing applies to your Lexus car & in this situation you are looking for any remanufactured or used Lexus S250 engines. There is a number of reason to buy used Lexus engines including their low cost.

Here in this article, we have shared the information on the best reason to buy used Lexus ES250 engines compared to choosing a new one. I hope this article will help you to understand the importance of a used engine & you can easily take your decision.