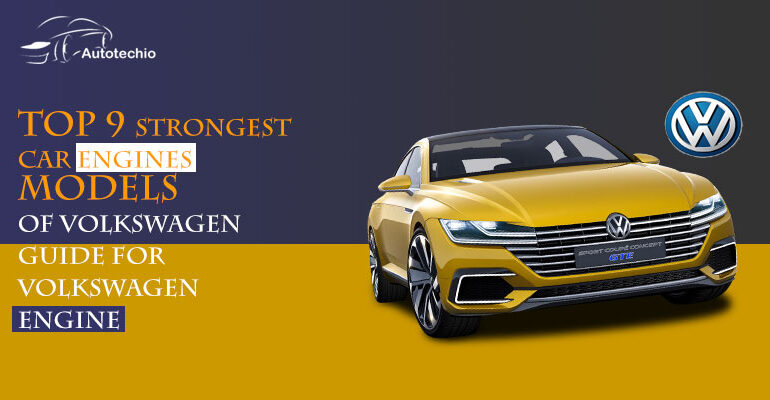 When we are discussing the car engine, frankly speaking, power is not everything. But the understanding of the BHP or which car engine is more strong gives you more understanding related to the specification. If you want to know about your Volkswagen car engine, here we are sharing the information on the top 9 strongest engines of Volkswagen.

As we know that Volkswagen is one of the well-known & reputed motor companies that design best in the quality new engines for sale. Due to their highly efficient performance, they are best selling car worldwide. But do you know what makes this car best, the answer is best in quality & powerful engine Volkswagen. They do continuously & day by day integration in the technology to serve better & leading car engine to the clients. This ideal german based car manufacturing organization deeply searches the needs & designs their motor engines based on needs. The availability of Volkswagen cars in both petrol & diesel engine at best price gives the best opportunity of selecting a four-wheeler.

Here get the information for the top 9 strongest engines of Volkswagen which are highly demanding & best selling from their era.

When we discussed the types of Volkswagen engines, there is a huge variety & options. But a few of them break all the records of selling due to the performance & efficiency. This allowed the company reaches out to new customers on a global scale, and it further added to its reputation as a low-cost, high-quality option. Models constantly appeared, leaving many people wondering who was the finest of the best at the moment. Also, the used & remanufactured engines of Volkswagen are also giving the same power & efficiency with low buying features. A few of them are,

The Volkswagen Touareg very newly launched model of this company which is introduced in the year 2021. This all-wheel-drive SUV presents with 5 doors & 4 people seating capacity. With a maximum speed of 155 miles per hour, the engine has 456 Hp. Also, the turbocharged 3 ltr & 24v V6 gasoline engine along with the electric assistance able to accelerate the speed 62+ miles per hour within 5 seconds. Apart from that, the 5434 lbs curb weight will give 87.1 mpg & continuous travel 1700+ miles. The tank capacity of this car engine is  20.1 gallons & the battery capacity is 17.9 kWh. It comes with 8-speed automatic transmission & 23.5 cubic feet of luggage space which is expandable up to 59.2 cubic feet with 1202 lbs maximum load capacity.

This model engine of Volkswagen introduces in the year 2003 with a few major updates till 2009. This engine is facilitated in 2009 with its unique identity 20009 Volkswagen Phaeton V84 motion. This all-wheel-drive feature sedan presents with 4 doors & 4 to 5 people seating capacity. The 330 Hp powerful engine, the naturally aspirated 4.2 Liter 40v quad-cam V8 gasoline engine accelerates this Phaeton V8 4Motion to 62 mph in 6.9 seconds and on to a maximum speed of 155 mph. The 6-speed manual transmission & 17.7 cubic feet of luggage capacity make them more efficient for personal use. The continuous traveling 427 miles without refilling the 23-gallon capacity fuel tank.

Volkswagen’s client base grew significantly after launching the Passat B1 in 1972, a family-oriented vehicle. Also, it’s still being made today, though with a few tweaks. The B8, now in its seventh generation, continues to be a high-quality family car. This huge family vehicle with either front-wheel or four-wheel drive. It’s a good car to utilize if you’re searching for something that won’t break the bank for a large family. It’s even received many prizes, including Motor Trend Car of the Year 2012 and for the best fuel-efficient car.

The Volkswagen Jetta, a long-time classic car that first appears on the market in 1974, is still on the road today. Thanks to how well it has been maintained and pushed as a car over the years. The newest generation GLi was unveiled to the public in February, with a 228 horsepower engine, similar to those found in the latest GTi models. They are likewise on the same platform as their related and use the same transmission options. The Active Suspension and standard black painted rear-view mirrors are the main features of the automobile.

The sports car design was favorably regarded in its initial generation. That lasted from 1988 to 1995 and took its small design to a sporty level, similar to the Golf and Jetta family. Engines ranged in size from 1.8L I4 to 2.9L I4. After the discontinuation of the Sirocco, these strongest engines Volkswagen introduce. Also, you can see how the coupe-bodied car detracted from it, especially with additional power under the hood. The classic feature & leading status manage its market position & there is no need to do any change in this model.

The Volkswagen GTI was born from the idea of taking a well-made car and making it, well, better. This GTI Volkswagen engine stands for Grand Tourer Injection, which is a fancy way of explaining the car is equipped with a direct fuel injection system. Also, the latest model now has 228 horsepower and a 2.0 L 4-cylinder engine that is very standard. It’s a more modern take on an older classic, and the car’s design is nevertheless greatly influenced by how the old ones appeared. Apart from that, it can even deliver a competitive MPG, with 25 in congested areas and 35 on empty highways.

The solid first-generation strongest engines of Volkswagen that leading the market for eight years. Also, you can see the various models of these vehicles on the road today also. After releasing the Volkswagen Scirocco company comes into the front line of manufacturing the best car engine in the world. The second generation continued where the first left off, with engines ranging from 1.3L I4 to 1.8L I4 in the final model. All models had engines ranging from a 1.4L I4 to a 2.0L I4 until the third generation terminated a few years ago.

The Golf R32, while not as well-known as the Beetle, stands out from the crowd thanks to its performance. It was manufactured between 2003 and 2008 and soon became popular among drag racers and auto crossers. The R stands for Volkswagen Racing, while the 32 represents the engine’s displacement. With a 3.2L VR6 engine, it accelerated quickly to high speeds of around 155 miles per hour. It was based on the Golf GTi and was only supposed to be a limited edition model, but it was extended due to consumer demand. Due to its fabulous look & highly demanding feature, this model of Volkswagen appears in many video games.

It’s easy to see why the Beetle was so popular when it first appeared on the scene in the glorious design, cool looks & number of features. The facts speak for themselves when it comes to how successfully this car performed internationally, with over 21 million models made and sold. Also, the iconic feature of this engine makes them more efficient for long driving. This ensured that sales remained high for decades. Unfortunately, it was discontinued in 2003, and while it was unfortunate that it had to go. They have lately restored it with new dune buggy versions.

Volkswagen, a well-known & highly reputed manufacturer of motor cars & other vehicles for sale. All the engines for Volkswagen cars are designed with the latest technology & quality parts. That makes them highly reliable & a long-duration performance. Here in this article, we have shared the information for the top 9 strongest engines of Volkswagen. The quality performance, high fuel efficiency, power & many other features of these engines increase their credibility.

I hope this article will help you a lot to understand the various feature of different categories of Volkswagen engines.