Bad Habits We Need To Avoid To Protect Car Clutch 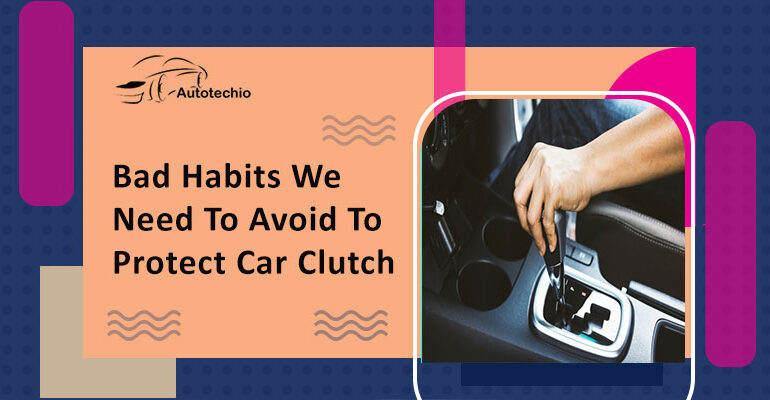 Agree or not, but the truth is the world is slowly shifting on the automatic transmission & ditching the old-fashioned manual gearbox vehicles. But it will take a few more time to release all manual transmission cars in the USA. Just because you need to know the various operational feature to maximize the life of the manual transmission. As we know the clutch is an important part of the manual car. Without it, you are not able to shift gears. This is the most important link between transmission & engine. It completely depends on your driving style what should you not do with the clutch paddle.

Moreover, there are several ways or we can say bad driving habits that destroy car clutch life earlier. Here in this section of car clutch information, we have shared the best knowledge for what destroys your clutch & tips to protect clutch life.

Let’s get the information for the bad driving habits that destroy or minimize the life of the clutch, Doesn’t matter which type of car you own a new or used engine car.

Frequent use of clutch paddle in traffic:

If your car is not moving for more than 20 seconds & still your car is in gear mode & you continue pressing the clutch is the most common bad habit. If you already know the traffic is stable & moving for a while shift gear in neutral & release the clutch. Keeping the clutch down for a long duration is a major cause for destroying it. It will harm the ball bearing of the clutch plate. You can easily change it but the process is taking too much time & you need to take out a complete setup. Also, this is very simple as long as your car engine, transmission, clutch & other parts do not open they are more problem-free.

Put your car in gear at redlight:

Strictly avoid it, when you are in red light or stop light make sure your car is in neutral mode. Also, the waiting time is more than 60 seconds stop the car engine is good for the environment as well as for your motor vehicle.

Resting your hand on gear lever:

Most of the time we are doing this mistake by continuously holding the geat leaver. This is also a bad driving habit. Holding your hand in the gear stick puts some extra pressure on the manual gear system. It also affects the overall rotation system. Which turned into major & expensive repair costs.

Putting extra load on the engine:

That means when you drive your car in higher gear & accelerate it for a long duration. It will put some extra load on the car engine as well as on the gear system. That’s the reason many manufacturers suggest running a car at average speed. To get high efficiency the recommended speed is 40 to 50 miles per hour in 4th & 5th gear.

A few drivers especially the new one taking too much time to shift gear from one to another. It will also put an extra load on the clutch system. So always make sure that whenever you are shifting the gear, shift it quickly.

This is the common problem with speed & fun lovers. But we strictly suggest driving a car is not a video game where you are not considering the speed limit. If you are pressing the clutch & raising the RPM 4000 to 5000, it will destruct the entire clutch system.

Here in this blog, we have shared the information for bad habits we need to optimize & avoid while driving a motor vehicle. I hope the above information will help you a lot more with a better understanding of to increase the life of clutch system & things you need to avoid when driving your car.