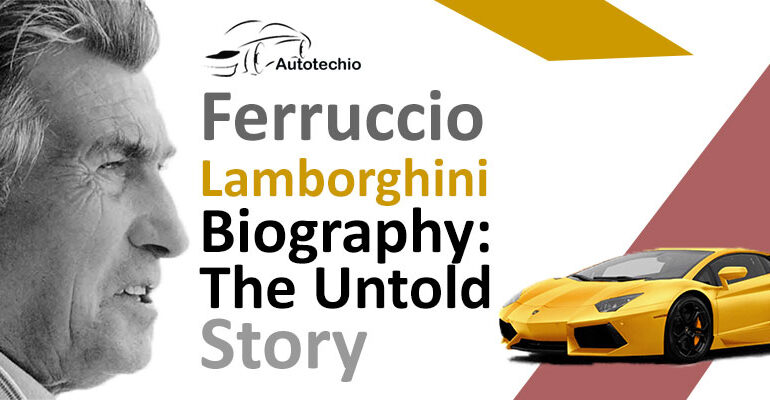 Have you ever listened about the Lamborghini? If yes then it is sure you also want to know about who is the creator of this luxury and expensive car. So today we will tell you about its designer. Ferruccio Lamborghini full name was Ferruccio Elio Arturo Lamborghini.

He started working on his father’s tractor Ferruccio played with a lot of agricultural equipment and invented a lot. One of the inventions made by them burned the entire farm. Later that Ferruccio was then sent to a technical school so that he could accept more machinery.

When he grew up, his parents arranged for him to go to an industrial college in Bologna. After a few years, he graduated with a degree in industrial engineering and started working in a repair workshop.

During World War II, he was recruited to the Italian Air Force in 1940  to working for transportation sections. Where he served as a mechanic in the Italian garrison on Rhodes Island, being a supervisor of the vehicle carrying unit.

He became a prisoner of war by the British military forces after 1944. That had kept him to work in his motoring department, in this way. Ferruccio had the experience of having cars on the road for the first time, even with limited supplies.

He married Clelia Monti, but his wife died in 1947 while she was giving birth to the child a boy named Tonio.

He returned to his hometown after the war and opened a garage in Pieve di Cento. Where he started converting old war surplus material into tractors needed for local farmers, Lamborghini tractor business was started in a small garage, but the business became really successful and soon thereafter had to move to larger campuses.

By now Ferruccio had also started tuning Fiat cars; He actually built a Fiat Topolino for himself and entered the Mig Miglia competition in 1948. Ferruccio modified an old Fiat Topolino he had bought in his time. His involvement ended after 1,100 kilometres when he drove the car to a restaurant in the city piano of Turin. Unfortunately, the car was ruined in the accident.

Starting of the Business

The Italian manufacturer decided to form a Lamborghini company with the target of competition with the Enzo Ferrari. It all began after the Second World War when a man gets a Ferrari sports car, in which he noticed that the clutch components were what they used on their tractors.

For such reasons, he decided to visit Enzo Ferrari to tell him about the problems he had with his car; he could not find a solution, so he decided to make a better sports car than Ferrari. The man was Ferruccio Lamborghini. To serve its purpose, Ferruccio founded the company “Automobili Ferruccio Lamborghini” in May 1963 and hired former Ferrari engineers Gianpolo Dallara and Robert Wallace to design and develop their cars.

The first car manufactured in the company was the Lamborghini 350 GT. It was far better in terms of Ferruccio’s Turin faults. The year 1967 came, and Miura was praised by all the elite media, the prototype taking into the list of branded cars.

His name is due to the Spanish bullfighting livestock as the founder of Lamborghini was fond of bullfighting and hence the brand’s logo. Apart from all their cars, all his car names on these animals.

During the 1970s, Ferruccio Lamborghini’s companies suffered from financial difficulties.  In 1971, the Lamborghini Trattori, which exported nearly half of its production of tractors, when the South African importer canceled all its orders.

In 1972, he made major investments to improve the production capacity of his factory, so that a large-scale order from South America could be followed. Sometime later, Lamborghini was informed that the order had been canceled, so the Italian was forced to sell a part of his company to get some of the money spent back.

In the same year, Georges-Henry Rosetti joined the company. In 1973, Ferruccio Lamborghini sold part of the company that was still held by Rene Leimer.

In 1974, Lamborghini left the industrial world and retired to a 3 km² (740-acre) property called “La Fiorita” on the shores of Lake Trasimeno in Castiglione del Lago, a town in the region of Umbria in central Italy.

Later Ferruccio Lamborghini went to live in the vineyard. It was bought a few years ago and enter into the agriculture work. Ferruccio delighted in hunting and making his own wines. Lamborghini also designed his golf course to manage several business interests.

At the age of 76 on 20 Feb 1993, Ferruccio passed away in Silvestrini Hospital in Perugia after getting a heart attack fifteen days ago after a heart attack.