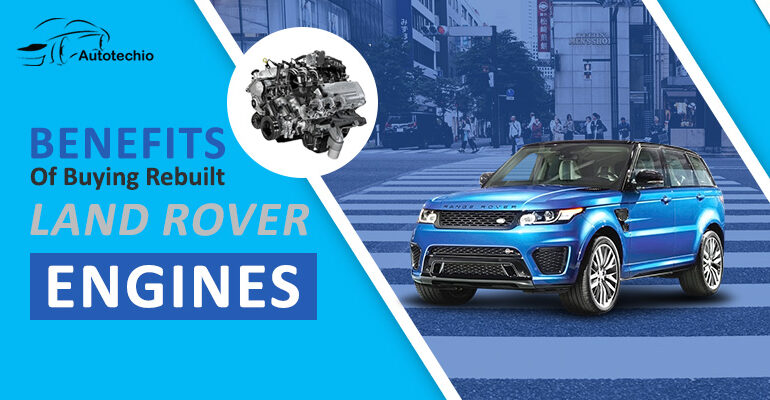 Owned a Land Rover but getting an issue with that old car engine. Don’t worry, buying a rebuilt Land Rover engine gives you similar driving when you drive your luxurious car. Also, the low buying cost of Land Rover rebuilt engines make them more beneficial for the users. As we know that an engine has a number of moving parts & the continuous use of those parts engine may create problems. Due to these various problems in the car engine, you lost the previous efficiency of an engine. And this is the indication of engine replacement with the rebuilt or remanufactured engine. Here in this article, we share the information on the benefits of rebuilt Land Rover engines.

A land rover engine comprises a number of moving parts. These are daily subjected to increases in the temperature & pressure. After 100,000 miles or more it can show signs of wear and tear. You can either replace the engine or replace the car during this scenario. Buying a new landrover is a very expensive process instead you can easily replace it with new or low-cost rebuilt engines. Many factors lead to engine failure, it is necessary to recognize your option for the repair of the engine. But before getting more information about the benefits of rebuilt Land Rover engines first, we discuss it.

What are Land Rover Engines?

The rebuilt landrover engines involve removing the engine from the car and completely disassembling it. Then, the disassembled parts are cleaned and inspected. The damaged parts replaced with new parts or refurbished replacement parts. OEM standards met by using new gaskets, seals, and lubricants in the assembly are the most significant benefits of rebuilt Land Rover engines.

Landrover is one of the most expensive car in the world with a lot of modern technologies. It has a reputation for making high-class and stylish cars. The latest range rover built with less complex and more reliable electrical components. With modern technology, it is bound with problems now and then. The overall reliability of the land rover is not that great. But the individual components of the car such as its engine rated high in the reliability index report.

The range rover for the cost of rebuilt engines is between $5000 and $6500. You are provided with the choice of either repairing the existing block or purchasing an exchange block. To repair Land Rover Range Rover V8 motors can cost up to $13-16000. To repair short blocks such as bearings, flanged liners, pistons, and other parts can cost about $4000.

Once the engine becomes problematic, you would likely consider whether to buy a new or buy rebuilt engine for your vehicle. Here is the list of benefits of buying a land rover rebuilt engine,

Here in this article, we shared the information on the benefits of rebuilt Land Rover engines & reasons to buy. I hope the above information gives you a better understanding of rebuilt engines.