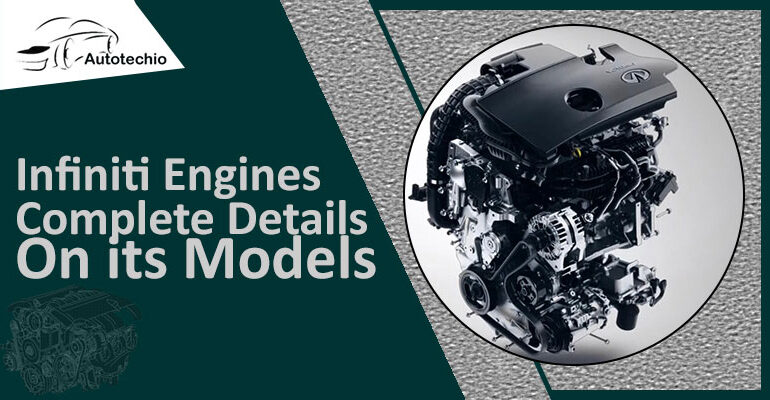 Infiniti car manufacturing brand is one well-known & leading service provider of luxurious vehicles all over the world. The excellent quality, fun to drive & superior class design are a few of the best features of this car. There is very little possibility that someone is not familiar with the brand. But if you want to know more about various types of these luxurious vehicles & what is the difference between Infiniti models. So spend your few minutes reading this article. Here in this article, we shared the information for Infiniti car engine models with specs & model names. All this information will help you to identify the best & suitable match according to your needs.

Japanese automaker giant Nissan Motors introduce the luxury Infiniti car models in 1989. In the earlier period of launching this brand captured a large sector in the automobile industry. Also, they compete very well in the same line as Acura & Lexus. This company also comes under top car brands in the USA.

You may wonder to know what engines Infiniti cars use. Well, let’s take a sneak peek at that! Infiniti uses the powerful & glorious engine of Nissan but not always in a few versions of Infiniti you will also find the engine of Mercedes Benz. So, whenever your old Infiniti engine needs a replacement you will go through the used Mercedes or Nissan used engines. As these engines do not require advanced technology in installation. Rather these engines are well connected to the ECU system.

What are Infiniti car engine models?

The cheapest car model uses a 4-cylinder turbocharged Mercedes Benz engine and also a V6 Nissan VQ25. The medium-priced models of Infiniti are used 6-cylinder VQ35 and VQ37 and these are found in many Infiniti models. On the other hand, the costliest, largest cars or SUVs are provided with 8-cylinder V8 engines such as VK45, VK50, and VK56.

If we take old models of this brand from the 90s into consideration, we can find they were equipped with inline 4-cylinder SR20DE along with VG30, VH45, VH41, and other kinds of engines. This brand rarely uses Diesel engines in the car model, although you may get to see a diesel Infiniti with a 3.0 Litre V9X specification or a Mercedes-Benz OM651.

But nowadays rising interest of the customers is the hybrid Infiniti but they are not too many and are limited. To our surprise, this brand has increased its engine’s product portfolio by adding electric motor engines into it. Currently, VQ35HR and QR25DER are the only two motor engines used by the brand which run on electric power.

Apart from just luxury and comfort, this brand also tries to cater to audiences who love speed. For the customers who love top fast & expensive car brands, they offer the VR30DDTT sports engine. Although being a slightly smaller version of the GTR engine Nissan, it still does the work. Let’s get detailed information on Infiniti car engine models.

You can choose the different car models from the list mentioned below. Through this, you will get an insight into who makes these Infiniti engines. You will find the differences between the most popular ones, what are their modifications and inside which cars you might find them.

Being a midsize car that replaced Infiniti J30 and was produced from 1995 to 2004. It was made for the North American Market. In the model range list, this model took place between G20 and Q45. Both models are V6 engines. I30 had two variants. First came the 193 horsepower VQ30DE engine (First generation) and then followed the 230 Hp VQ30DEK variant (Second generation) from 1999 to 2004. During this later period, the i35 has a power of 255HP was also launched. This small model was replaced by the large Infiniti M in 2004.

G35/37 and Q40 were midsize cars produced from 1990 to 2015. Nissan Primera was the first and the second version of this model and the target market was the USA. Nissan skyline was the third generation car in this group, which was yet again designed for the US market. Both the G37 from the fourth generation was renamed Q60 in 2013. In 2014, the G37 Sedan was newly termed Q40. Infiniti G was produced under Infiniti I, then later M, and was produced until 2015. Later, it was replaced by the Q50.

Being a full-size car produced from 1989 to 2006. The ancient model of this variant, a shorter Nissan President HG50, was also designed for the US market. Nissan Cima Y33 from the second generation was changed a little. The third-generation model is the Nissan President PGF50. Initially, Q45 was a flagship model, and it surpassed Infiniti I and Infiniti M in the market. This car stopped production in 2006, and Infiniti M took the flagship position, eventually.

Being a midsize car that replaced G37/Q40 and is available since 2013, the JDM Nissan Skyline V37 ranges between Q30 and Q70. It would be difficult to find the engine that fits your needs because the range is not much. The company got to know that and increased the choices and now Infiniti Q50 engines have a broad range, including the 3.7L VQ37VHR with 333HP.

Being a full-size premium car, Infiniti Q70 M has been available since 1989. The initial version had a coupe body which was made in 1993. There was a break later, but in 2002, the manufacturing of Nissan Gloria was started. Designed for the North American market, it was named Infiniti M45. Under the name Infiniti M, the analog of the JDM Nissan Fuga has been sold since 2004.

In 2013, the name changed to Q70. Q70 is over Q50/G and is the flagship model. Such high-level cars are unquestionably equipped with the latest powerful engines.

Introduced and being in the market, since 2012 this model is a mid-size crossover. Initially called JX35 was later renamed QX60. Amidst the SUV range, Infiniti QX60 ranges between QX50 and QX80. You can buy this model with only two engines with almost the same capacity. The 3.5L VQ35DE, installed in many Nissan and Infiniti models, is quite popular. Later, a hybrid version came into the market. An electric motor with a Cylinder QR25DER, together with giving a 250 horsepower similar to VQ35.

It is a luxury sports crossover available in the market since 2002. Was named FX in 2013 but then renamed QX70. Having no analogs in the Nissan range, which is unusual, this car ranges between QX50 and QX80. Known as the sports SUV, its engine is extremely powerful. The Infiniti FX35 engine is the most popular with a pleasant sound. Its engine was changed to VQ35HR level in the second generation. The next most popular engine is the Infiniti FX45 engine, which, not to our surprise, is an even more powerful engine with V8 and can be found only in the first-generation FX. The FX37 engine isn’t very common and has 333 horsepower. It was installed in the second generation. The FX50 with VK50VE motor and diesel FX30d with V9X motor are the rarest of all.

This is a large luxury SUV and has been available in the market since 2004. This car was named QX56 until 2013 and was later renamed wereQX80. Nissan Armada and Nissan Patrol are the Nissan models this model has a counterpart. QX80 comes above QX60 and QX70 and also is the SUV flagship. A flagship model is always equipped with the most powerful engines within reach. Generation one engine QX56 is a huge V8 called VK56DE 5.6L. QX80 and QX56 engines of generation to have the same V8 but are changed to VK56VD level because of which its power has increased dramatically, gaining up to 400 hp. Currently, it’s impossible to buy a QX80 Infiniti with another engine.

Infiniti design & manufactures a lot of luxury cars with highly powerful engines. At the time of buying a luxurious Infiniti car, the knowledge of Infiniti models & specs will help you to take the right decision according to your needs. Here in this article, we shared the information for Infiniti car engine models. You will find here the scenario of the engines owned by Infiniti and their models. I hope the above information will be helpful for the user to understand Infiniti car engine models.