Most Common Engine & Transmission Issues with The Buick Enclave 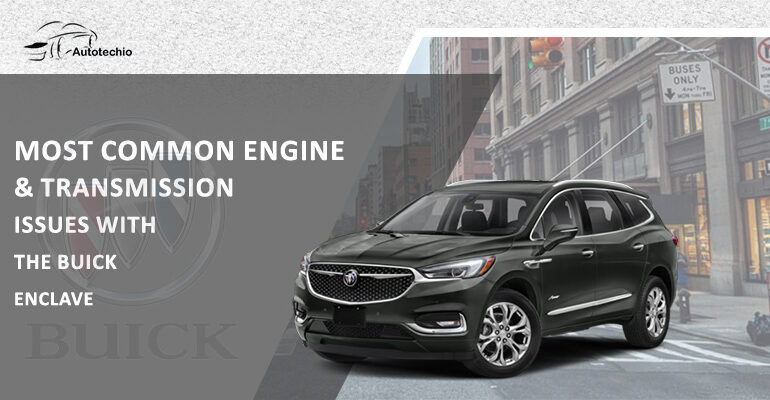 Buick Enclave is a midsize SUV that has a sleek design and offers 3 rows of seating. It is a dominant model that offers family road trips with high-end features, a powerful engine, and a Buick’s transmission. but the continuous use or maybe the absence of transmission maintenance you get a problem with its transmission. Here in this article, we shared the information for the most common engine & transmission issues with the Buick Enclave.

GM has produced many SUVs over the years. Buick Enclave is one of the popular models. It comprises a powerful engine with the best quality auto parts. Sometimes, issues have been gained in the engine. May your car will not move because of these engine problems. Let us discuss some common and frequently occurring issues with the various models of Buick enclave. Here get the list of a few common Buick Enclave engine problems.

In 2008, the GM engineers have not refined the 3.6 liter V6 in the Buick Enclave. Although they use low-quality of parts that do not handle the durability which are the expectations of the customer. Because of this, the engine leads to stalling, rattling on startup, and also blown. There can be also a problem of excessive oil consumption and catastrophic failure that results in a hole in the engine block.

You may think for rebuild your engine to solve these problems. Although rebuilding can affect your engine positively. Even you may wonder about the cost of rebuilding the engines is very low. Apart from this, you can also replace your malfunctioning engines with the used engines at a low cost. These engines offer the best quality at a low cost. And these engines are completely inspected before delivering to the client.

In 2010, the Buick enclave engine problems persisted. As there is the problem of damaged and blow engine for many Buick. There can be a cracked engine blocks problem which can solve by replacing the engine. Replacement will not affect your car value, rather it will increase the performance of your car.

Apart from this, in 2010, the Buick Enclave has many issues like power steering issues, air condition issues, and many more. These problems occur because of the use of low-quality products in refining the engines.

In 2011, the car engine problems have been solved in the Buick enclave. There is a drastic boost in initial quality, thus the reliability had improved.

But in 2014, the facelift needed to refresh the enclave, which leads to problems with the surface. Again, it had engine & transmission issues, which lead to the broken motor mount. It still caused the occasional blown engine less frequently. Thus, it needs complete repair with the rebuild & replacement.

Apart from these, there are many issues gained in the Buick Enclave, like steering suspension problems. Because of these issues, may your car auto parts are got damaged. It may affect your engine and transmission badly. Hence, to recover your issues, you need to replace your malfunctioning auto parts like engines and transmission with another one. You can also go through with used Buick transmission and used Buick engines at the best price. These are some alternatives that can offer you a smoother ride and discover your old Buick car. Although these are offered at low cost, i.e., pocket-friendly prices.

The torque converter is mostly used in automatic transmission. It is responsible to transfer the powers to the roadside wheels. As if it fails. Then the power may not transfer. Thus, it will make the vehicle drive malfunction. It is necessary to replace the torque converter. Because the software updates and fluid flushes can help, but not particularly resolve that problem.

In 2009, GM uses automatic transmissions in the Buick Enclave. Thus, it is prone to gear failure. Usually, when the transmission refuses to shift in reverse, or may your transmission is slipping while changing the gear. This shows that your transmission has been damaged.
To recover from this issue, you need to replace your malfunctioning transmission with a new one.

Buick Enclave is one of the top models discovered by GM motors. Although the GM motors use high-quality auto parts in refining the model. But sometimes some problems come because of less maintenance and care. These problems may affect the engines as problems in startup and may the engine is blowing. Although they affect the transmission like, refuse to shift, torque converter problems,s and many more. Because of these problems, your car will become a waste and you can not enjoy the ride.

Here you may get a better understanding of the most common problems that occur in the Buick enclave. Although you will get the solutions to recover these problems under your budget.